Walmart and Amazon have been at odds for some time now, with the former desperately searching for ways to break the latter's stranglehold on the ecommerce marketplace.

Amazon has finally broken into the top ten of the Fortune 500 and clearly has its sights set on the #1 spot, which has been held by Walmart for the past six years. Walmart's recent acquisitions of Jet.com, Bonobos, and ModCloth demonstrates that the retail giant takes this challenge seriously, and is constantly making roads into new ecommerce markets. Convenience-based innovations - such as free two-day shipping with no membership fees and one-click reorder options - also serve to establish Walmart as a serious ecommerce contender.

However, in its most recent development, rather than trying to ape Amazon's ecommerce offerings, Walmart is making a concerted effort to differentiate.

The first stage in creating an ecommerce platform directly opposed to Amazon's ethos was a massive redesign of the Walmart website. 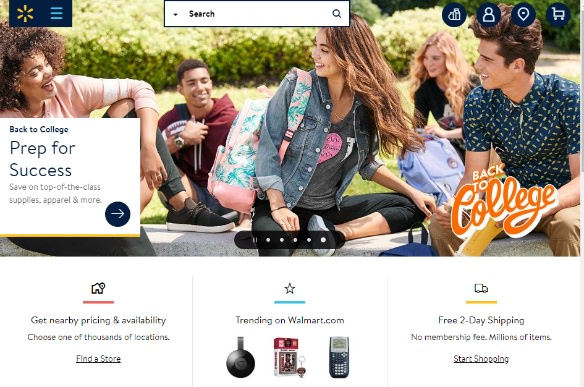 Forgoing Amazon's everything-including-the-kitchen-sink warehouse feel, Walmart has made its website warmer and much more inviting. Whereas Amazon's products are presented free of real-life context (a simple image of the item against a soulless white background is the well-known standard), Walmart has opted to feature photos of real people enjoying their wares in real-life situations - often with friends and family. The result is something that invokes the feeling that Walmart is more than just a warehouse, devoid of personality, but a lifestyle brand with a focus on relationships.

"The imagery is very different," said Senior Vice President of Customer Experience and Product at Walmart Ecommerce, Jordan Sweetnam. "It's much more focused on the human elements, showing real-life products in use and in context. In our customer testing, it draws people in more. It's less like you're being sold a product, and more like, 'I also have a kid in a highchair and see cereal thrown on the ground!'"

Instead of seeing the brick and mortar and ecommerce arms of its business as disparate elements, Walmart is using each to complement the other.

Walmart has over 4,500 physical stores - far, far more than Amazon - and is now leveraging them to augment its online offerings. For example, Walmart website visitors are now presented with the option of ordering groceries online, which can then be collected later at their local Walmart store.

Walmart is also making the online platform more personal with a combination of algorithmically-driven and merchandiser-curated recommendations.

"We spent a lot of time building up the personas, like 'I have a family with two kids. I have a dog,'" said Sweetnam. "These personas were constructed by Walmart based upon your shopping history, but they weren't all that deeply utilized by Walmart.com, which only used them to funnel you into generic lists like 'back to school' or whatever else might fit that generalized portrait of you the best. Now, Walmart is using your persona to create curated product pages just for you, by allowing its own merchandisers to make the best recommendations for you."

The Walmart website also presents recommendations based on what is selling well at a visitor's local Walmart. While a large proportion of the products stocked at Walmart are available no matter which location you find yourself in, a certain amount of shelf space is dedicated to regional inventory, and it's great to see the ecommerce platform imitating this local store feeling.

Walmart's redesigned ecommerce platform went live in May, and the company will no doubt be mining massive amounts of data to help deduce whether the initiative has been successful or not. By injecting some personality into its website, Walmart is clearly dedicated to bringing some of the local friendliness of its physical stores to its online offerings.

It's a smart move for Walmart to differentiate itself. Amazon is already doing Amazon better than anyone else, so why try and beat them at their own game? Far better to try and offer something different. Something desirable, personal. Something that Amazon doesn't offer - such as warmth and personality.

"What we heard from customer feedback is, 'it's dangerously enticing.' It's kind of sucking people into these journeys of discovery for products they just weren't aware we had before," said Sweetnam.

The challenges and opportunities presented by online giants such as Walmart and Amazon are set to be hot topics at eTail West 2019, taking place next February at the JW Marriott, Palm Springs, CA.

Please download the agenda today for more information and insights.