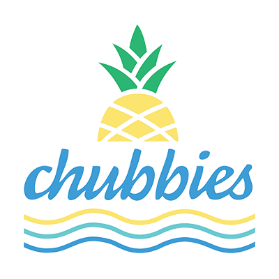 Connecting with Millennials is a big priority for ecommerce marketing in 2019. This demographic sits in their late twenties and mid-thirties and make up a significant proportion of the consumer market. They are the ones with disposable income to spend, and they're looking for brands which speak directly to them with which to spend it.

One digital phenomenon which has immense popularity with this population is memes. The phrase was originally coined in evolutionary biologist, Richard Dawkins' seminal book on genetics, The Selfish Gene, to describe the way genes are passed from parent to child. "Meme" was then co-opted to describe viral posts on the internet - usually featuring an image with an amusing caption - due to the way they are passed from person to person.

As a fashion brand with Millennials as its target audience, Chubbies has been using memes alongside 80s cultural references grab their attention.

Dedicated to selling quality and quirky casual shorts and tops for men, Chubbies prides itself on its colorful and playful image - an ethos which is reflected in its marketing.

The 1980s were famous for the bright and often garish fashion of the time - a style which continued to be popular into the early 90s. However, once the ripped jeans and lumberjack shirts of the 90s' grunge phase grew in popularity, colors became more muted and the loud styles of the 80s faded from the clothes racks.

A significant portion of Millennials had their childhoods and adolescent years during this period. It's the nostalgia for these times that Chubbies wanted to leverage in its marketing and in its corporate voice.

"I think the Chubbies voice was very well-defined before I got here, but I think it's something that always continuously evolves based on the people that are putting it out," said Chubbies Ecommerce Content Manager and Comedian, Joey Avery. "It is always a group effort, but it's definitely something that has stayed firm. I feel like with me being there, I think I've added to it in my own way, but it still remains a consistent voice from before I got here and will probably be the same no matter what."

Chubbies taps into this nostalgia by posting nostalgic images on its social media accounts. These images are often family photos of the Chubbies founders themselves - usually featuring their fathers wearing the kinds of shorts Chubbies now sells. However, this strategy isn't the whole story and it's by combining its love for 80s nostalgia with a deep understanding of contemporary meme culture that Chubbies has really made a name for itself amongst its Millennial audience.

Chubbies has a very strong social media strategy. The brand constantly posts its own content but also spends a significant amount of time retweeting and reposting Instagram posts from its audience. This hammers home the message that the brand isn't just there to promote its own business but acts like any other friend or follower you might have on your social media platforms.

The funky fashion brand eschews cynical boardroom approved and committee crafted marketing efforts to target young people. Millennials are extremely savvy to this kind of tactic — transparent and disingenuous attempts to speak in their language is more likely to be met with eye-rolling contempt than engagement.

Instead, Chubbies' social media looks like the accounts of four guys who met in college (which is exactly what they are). It makes sure to jump on any hot new meme trends which are doing the rounds at any one time and puts its own Chubbies spin on the posts. For example, when the throwing cheese meme was popular, Chubbies posted the following video. 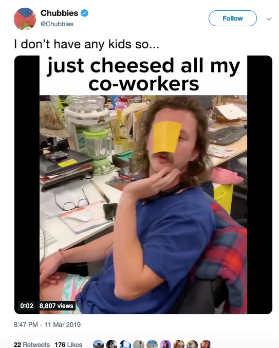 The post has received nearly 200 likes at the time of writing and 22 retweets, making it one of the brand's most popular tweets to date. There have been many other examples of Chubbies using memes to connect with its audience including the avoiding responsibility meme and one about dealing with Mondays.

Memes and nostalgia are a great way for a brand such as Chubbies to connect with its Millennial audience. The strategy stays true to the company's identity and mission statement.

"I think a realization for us from day one was that it's really important to treat your customers like your friends," said Chubbies Cofounder, Rainer Castillo. "I think that was really natural for us because our customers were our friends out of the get-go. You know, that went to all reaches of our company and it was a mantra that we all have been attached to for a long time, we still talk about it today. We have a cultural tenet, which is 'customers greater than company, greater than self.' And a lot of what we do is bring the customer to the forefront."

You can hear Chubbies' Cofounder, Rainer Castillo speak at eTail West 2020, being held in February, at the JW Marriott, Palm Springs, CA.

Please download the agenda today for more information and insights.